In this post’s antecedent, I presented an elemental pentad as another paradigm of integration. In this model I employed the five elements of Earth, Water, Fire, Air, & Ether as symbols for various qualities of the human being & human experience. One might imagine such model to represent a horizontal dimension to this vital interplay. In such a conception, our task was to ensure a balanced proportion & inter-relation between all the several elements.

But we might also conceive of a vertical dimension to the five-fold elements. Rather than proportion, the vertical scheme emphasizes fluid transition. In this conception, our task is to facilitate smooth movement between the sundry elements:
Earth
Water
Fire
Air
& Ether

To visualise the vertical model, one might picture a perpendicular spectrum from Earth to Ether, spanning from form at the bottom to potential at the apex. Ascending the y-axis in this conceit, we follow a trend of evolution—”turning out.” In this process, form is unbound from the fetters of definite earthy existence. Freed from boundary, it unwinds, spinning outwards and dispersing into the void of possibility.

Conversely, the descendent direction, we might call the current of manifestation. In this direction, the infinite potential of pure emptiness converges into (de)finite form. This is involution—”spinning in.” An analogous event might be the collapse of an unbounded electromagnetic wave into a definite particle (i. e. a photon). Similarly, for example, a thought arises in the mind, coalescing out of the silvery stuff of dreams. First entirely diaphanous, the said figment firms into an intention, stirs the will, & ultimately precipitates into an action with observable consequences in the physical universe. In this process we have descended our magical metaphysical elevator of sorts & exemplified the involutive process.

Allow me to illustrate the processes of involution & evolution with this hypothetical example: suppose I’m a monkey caught in a monkey-trap constituted of a ball-jar & a red banana, which, upon observing the fruit I approached & inserted my monkey paw into the mouth, grasped the prize in my monkey fist & then attempted to abscond withal. Only the trap was insidiously calibrated in such proportion that a monkey paw fits in but a monkey fist clasped about a banana does not fit out. Only if I were to relax my fist & relinquish my prize might I save myself from the clutches of a band of Indonesian poachers who intend to make a purse out of my hide, or even worse: sell me to a pet shop. Consider in this case that I have become involved in the particular enterprise & thereby jeopardized my welfare. If I value my self-preservation over a piece of fresh fruit, my only option is to relinquish my prospect, divest myself of the banana, & evolve from the whole affair. If I manage this, I will have traced the ascendant course of evolution upwards through the elements, from determine form (i.e. fixation on fresh fruit with my fist in a ball-jar, etc…) to the freedom of emptiness, whence I once again acquire the potential to become involved again, if I so chose. If, however, I am a philosophically minded primate, I may which to purse still further the course of evolution & seek enlightenment as an ascetic, meditating in the wilderness for forty years on the side of a mountain & eating tree-bark, incrementally divesting myself of all material involvement until my body withers away altogether. Conversely, I could go all the way into it & involve myself in a venture-capitalist enterprise, found a gigantic fruit franchise, & instate banana republics across an entire sub-continent by overthrowing local governments.

These are patently charicatured examples. Nevertheless, they are universal in principle. Of course, each of us is a natural joyrider on this lift, journeying up & down continually (like kids playing elevator-tag as we chase our dreams & follow our obligations). If we evolve too much, we spin outwards into everything & become nothing therefore. Conversely, it’s a tragically unfulfilled condition to be involved in an interminable eddy of mental & material proliferation; we could hardly desire to be so materially manifest as a rock. To phrase it figuratively, there’s no joy being stuck in broken elevator. Our task of integration, therefore, Structural & otherwise, is maintenance—to keep the lift in working order. Free from fettered & fixated fascia, our joyride transpires with ease. In the final post of this series, I will specifically examine how the five elements can inform our enterprise of Rolfing® Structural Integration.

Actuality & potential dance together in a tarantella of inverse proportion—the interplay of genesis & annihilation. 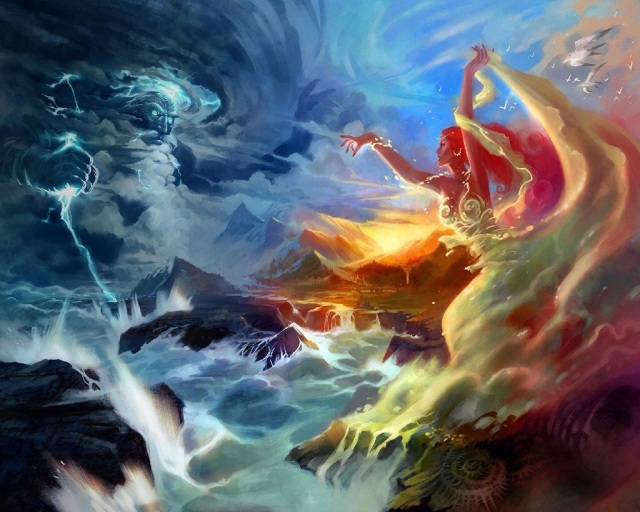