Outer space is perfectly dark—just look at the space between the stars on a clear night in winter. But this is only half of the truth: in fact, the former is utterly brimming with light; billows of light, photons by the bucketful, dancing omnipresently, even in the celestial interstices! These waves need both a subject & an object to display their brilliance; otherwise they remain invisible. Vibrations on the electromagnetic spectrum are not light. And neither is light as a phenomenon inherent to any given object. Rather light arises in the treble relationship; the commingling of eye, form, & electromagnetism. The amalgamation of invisible electromagnetic waves with a sentient being & a chunk of matter is the alchemy of luminosity.

Analogously, vibratory ripples in space tickle our ear-drums in the concert-hall. Translated into a nervous impulse, the latter dashes along the auditory nerve to the cerebral cortex, where it is behearkened as Beethoven’s VI. Again, the experience resides neither in the violins, the ripples, nor the nervous impulse. Rather, only when the said vibrations meet the human mind does the music arise & the apotheosis is complete…Beethoven’s Pastoral Symphony achieves a divinity that oscillations in an hypothetical ether do not.

If you go fishing for a cloud, you’ll return empty-netted. No experience is any less-nebulous than such a query.

Now look at a cup.
Sense yourself as subject.
Perceive the cup as object.
Recognise your experience of the cup as the relationship of these components.
Notice the trinitary nature of this & all experience.
Or to adopt another model: subject & object represent two poles in a single process: experience—see-er, seen, & the act of seeing.
Independently, none of these aspects exists at all. Without such a conceptual framework, we discover rather an undifferentiated soup of stuff & nothingness—an arbitrary admixture of matter & void. Emptiness to some, & to others ecstasy. To speak of a subject only makes sense in relation to an object, as a front to a back, a top to a bottom, a father to a son, an inside to an outside, stripes to plaid, etc…. They are different, yet not discreet.

Now consider the experience of pain. Apophatically, pain is not a thing, not a fact, not an object, etc…. You can’t say what shape it is, or what color, or texture. You can’t measure it with a pair of scales or any other instrument. Why? Because the minute you try to pin it down with a proverbial pair of forceps, isolate it, & measure it, it’s gone. Pain can never be separated from its context. It is not a thing; it’s an experience. This is to say that it is not intrinsic to any object, nor inherent in any subject. Instead, it is out of an unique combination of causes & conditions that the experience of pain arises. I, the subject, given my peculiar nature, disposition, mood, & nervous system, must (1) encounter a particular sensory stimulus, (2) interpret it as a threat or problem, (3) react against it in some way. Lacking any one of these conditions, pain is never born.

Nevertheless, these are not the terms in which we usually conceive of our experience. Instead, we often imagine pain to be a thing in itself: solid, substantial, & sinister. Or perhaps we imagine it to be inherent in a given event, like a kid who punches his friend in the teeth at recess after the latter called him a “nincompoop” as though he had no say in the matter.

“I didn’t have a choice,” the protagonist might say, as though he were some Newtonian billiard ball, bounced about at the whim of the Old Testament God in a deterministic universe.

We might chuckle & dismiss fatalism as a childish lack of discernment. And yet we often partake in precisely the same thinking whenever we discover ourselves raging against slow traffic or spotty wi-fi. Both of these models—ascribing ontological independence to displeasure & imagining it to reside inherently in external phenomena—are illusions. They are indeed convincing. Yet we need not let them fool us!

When we see with clarity, we appreciate such illusions for what they are…& forgo delusion by them. We must see pain as a contingency. It resides not in me, nor in the world in my alleged “oppressor,” but arises rather out of the particular relationship that I might adopt to him/her/it. Imagine you meet me sprinting down the sidewalk, my face contorted in the most horrible grimace of agony you could conceive withal:

“What in world are you running from?” you wonder, reasonably suspecting that I were raving bedlamite.

As if the scene weren’t evidence enough, such a response would serve as incontrovertible proof for my sheer lunacy. Why? Because the migraine is in my experience; I am not separate from it. Struggling, squirming, running from it: such resistance obviously won’t serve me. And in fact, the general strain will invariably make my condition worse. The worst pain is the world is the one we think we might escape.

Consider the migraine in terms of the necessary conditions that I proposed earlier: the first condition must have been fulfilled, for otherwise I never would have found out about the headache. The second condition must have followed because I expressed the third condition in my peripatetic reaction. And the result was that you hypothetically perceived a tormented lunatic careening down the street.

But what if I had made different choices in my response? At any point along this serial procession, I could have cut the chain of suffering & never landed in such a pitiful quagmire. Say I was drunk & I had never felt the discomfort in the first place. Or say I had felt it but hadn’t perceived it as any problem. Or say I had sensed it, tensed up as a response, but then simply surrendered to the experience…like Jesus:

“…Father, if thou be willing, remove this cup from me: nevertheless not my will, but thine, be done.”

Any one of these alternatives to an instinctual reaction would exemplify the subtle & judicious psychic judo that one must perform to dissolve pain at its source—not through resistance but through skill. Pain fools us into feeling we must actively manage it, like all “enemies”—

Do I not destroy my enemy when I make him my friend?

Lincoln’s rhetorical question expresses the most skillful approach to all adversaries & adversity. We must be so clever that we see through temptations to retaliate & therefore do not fall for them. Then we apprehend that it is not withstanding, but standing with uncomfortable experiences that proves their ultimate resolution.

We have therefore two options according to the model I have delineated: we can ride the ups & downs of the hedonistic whirligig that represents our life as we normally live it. In this condition, we amplify our own pain in a psychological echo-chamber that our very own resistance to the former constructs. Like a Minotaur in a hall of mirrors, we flee from this hobgoblin only to find his crookèd & vindictive visage around every corner. Our only hope seems to be to wait for Perseus in a pill-box & temporarily put the beast to sleep as Advil or Oxycoton. Only this is not a real hero but his reflection, since invariably we find ourselves back in the selfsame psychological labyrinth the minute the drugs wear off, and now the beast is hungry & hungover from the dose of pain meds. To resist discomfort is futile, it’s a tautology, tantamount to resisting resistance, since the latter is an essential quality of pain itself. Such advice is the prescription for one who wishes to circumvent suffering, to palliate pain—for one who prefers providing lip-service to liberation, but merely chases fleeting effects & is not willing to take effective action.

The other choice is for her who means to end suffering. She dismantles the entire structure from its foundation & removes one of the essential preconditions from above. Having sought out & eradicated pain’s discordant cause, the echoes of distress disperse over the hills & are lost in the greater landscape of our experience. If I embrace discomfort, my apparent object dissolves even as its promise is in the making & my gesture envelops thin air. All good ghosts walk through walls, and pain can’t be hugged. Nevertheless, one must attempt the feat to appreciate this fact. In order to truly escape pain, I must stop trying. 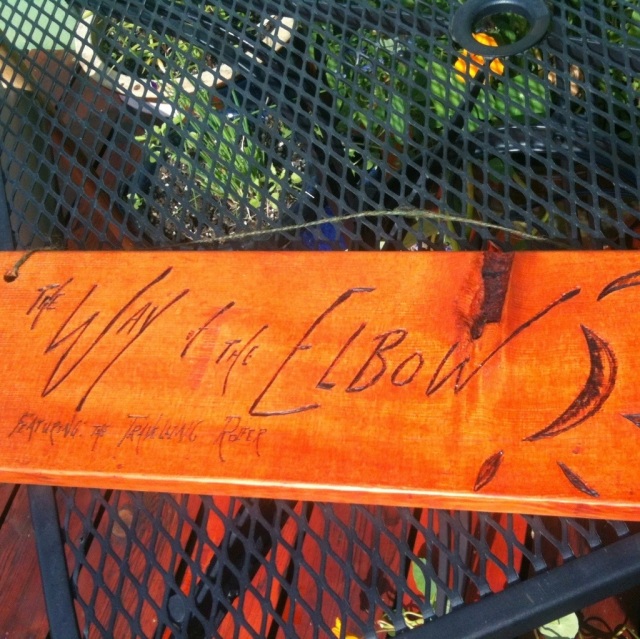